Our Buyer’s Choice this month is a little different, to celebrate the Queen’s Platinum Jubilee, which is being celebrated over the long bank holiday weekend of 4 June

If you’ve lived in the UK for any length of time there’s a strong chance you will have encountered a sandwich platter, and a 73%* chance it will have contained Coronation Chicken.

This dish was created in 1953 to mark the coronation of Queen Elizabeth II by Constance Spry, an English food writer and florist, and chef Rosemary Hume at the Cordon Bleu Cookery School in London. It was served at a dinner of visiting dignitaries from all over the world.

Unlike the version most commonly found today, the original recipe called for apricots, not raisins. A deceptively simple dish of poached chicken in a creamy mayonnaise sauce, it was served on a bed of salad, however later migrated its way into sandwiches as it became more popular.

It’s even made its way across the channel, under the name Poulet Reine Elizabeth.

It is thought that the dish was inspired by “Jubilee Chicken” created for the Silver Jubilee of the Queen’s father, George V, in 1935.

Another jubilee chicken recipe was created by renowned chef and culinary alchemist Heston Blumenthal in 2002 for the Queen’s Diamond Jubilee. This was said to be  “an aromatic blend of Indian spices mixed with mayonnaise, tender shredded chicken and fragrant coriander finished with peppery nigella seeds” – will be served alongside a “fragrant lapsang souchong tea-smoked salmon”.

There have been many variations on the theme of Coronation Chicken, from your supermarket meal deal to haute cuisine. An interesting variation is Great British Bake Off winner Nadiya Hussain’s Coronation Aubergine, which offers a meat-free alternative.

The 1953 recipe was created with an eye to post-war rationing and called for Curry powder as many spices were simply unavailable. You can however use curry paste, or indeed make your own variation. 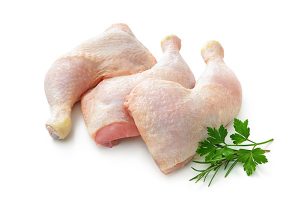 For the sake of simplicity, the chicken can be cooked however you prefer, with many versions using roast, shredded or grilled chicken breast. The important factor is to allow it to cool completely before combining with the sauce.

However, if you would like to be authentic you can poach the chicken for 15-20 minutes in water flavoured with traditional South Asian spices such as peppercorns, coriander seeds cinnamon and ginger.

The sauce is relatively simple:

It’s a very simple addition to your menu and incredibly versatile. You could use the recipe above as inspiration to give a current dish a “Jubilee” twist, or you could simply feature sandwiches, pastries or even jacket potatoes to very quickly give your customers a royal option over the long weekend.

Why choose IDC?
Our Services
Market Reports
i-Curate
Contact Us